Today has been an eventful day.. As I was heading out to the desert for a hike there was a light sandstorm, followed by a blinding rainfall. It’s flooded every week I’ve been here, so far. The weather had turned our convoy around, which was upsetting since I needed a break from the city. One of the old ladies in my car says, “Here… have some chocolate”. To my surprise, Vodka-filled chocolate. These sneaky Irish.. That didn’t quite make my day as she hoped, but thankfully my friend in a car far ahead called me about the perfect weather at the meeting point.

This hike was at the Graffiti Rocks, an archaeological event that I’ve been looking forward to. So after relaying the phone call and casting a vote.. we turned back around and gave the weather another try. Once we arrived, it was absolutely gorgeous! The sky was the clearest blue, that I’ve seen so far here. Not a cloud visible in the sky, yet the sun was not beaming strong at all. These trips are the highlights of my weekend, being able to congregate with foreigners from all corners of the world, hearing all the languages. All the women can’t strip off their abayas fast enough. All the kids can’t wait to break out in a run. 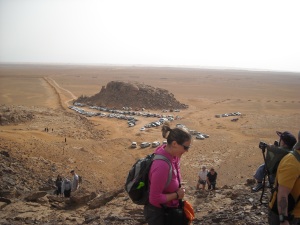 The landscape this week was different than the other locations. Instead of the rocky ground, that pounds your joints by the end of the hour hike.. this one was black rocky mountains, sitting on top of a soft red, beachy sand. Beautiful contrast. For these grounds, you have to venture out a little further from the city. 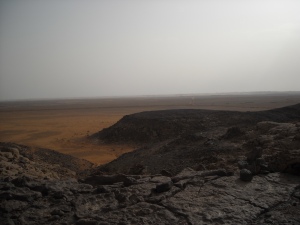 It was a difficult climb, so the smartest move is to step on the same secure rock as the previous climber. From a distance we’d probably resemble a trail of different colored ants. At the top of the mountain, we find many mounds of rocks, which happens to be ancient tombs. I guess that’s easier piling rock, instead of digging 6ft in this terrain. 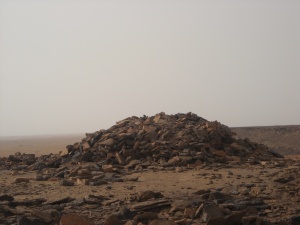 We leisurely work our way down the hill with a Spaniard family behind us, which gives my roommate and co-teacher the opportunity to practice their Spanish, and for me to ease-drop on the French clique in front of us. I hate the amount of French language I’ve lost along the years. At the bottom there’s long, flat sandy ground. Enough to make a runner break out into a sprint. I told my crew to go on ahead a little, solely for this purpose. It was short run, but sweet. 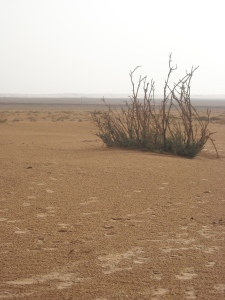 We come to a rest stop, where water and oranges are waiting. This is where we got our first glimpse at hieroglyphics. I interpret it to be a man riding on a camel. Then, directly above some fool defaced the rocks w/ initials. How in the world can someone be so naïve to add their modern marks to an ancient site, I have no idea! But it sorta pissed the anthropologist within me. We climb up another difficult hill to see graffiti of camel, antelope and maybe some sort of bird.. along with perhaps an ancient language that actually looks like Korean. Awesome finds!! 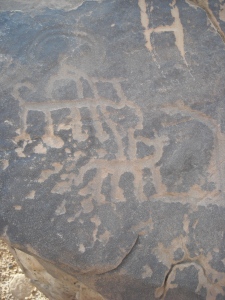 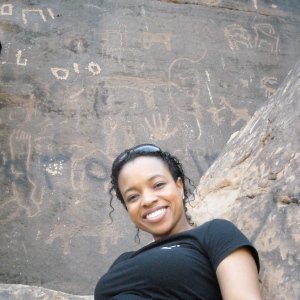 Hash Guy is at the bottom of the hill cooking sausages for 200 hungry hikers. The line goes through the parking lot. Some families are out on their beach towels and lawn chairs, around their private campfires. You look up and see the ship-shaped kite blowing, with the clear blue sky in the background… Then, we hear a yell… Some guy’s telling everyone to get down from the rocks and start packing up. We look to the left, and there’s a HUGE sandstorm coming over the hills. Imagine the movie “Twister”… 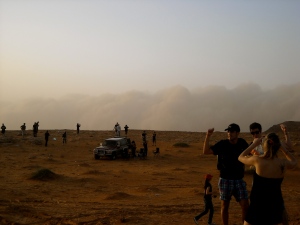 Everyone’s taking pictures and videos.. I’m one of these crazy ones, who wait til the last moment as well. So we jump into the car, and the storm basically chases us. The cloud looks so thick, that you could imagine the thing picking up our car and everything in its path. We decide to sit it out on the side of the highway for an hour, while the entire sky goes black. It eventually clears a little, and we start inching our way back to the city. By the way, I’m now typing this in the car, as we drive 10mph. Needless to say, it has been quite an interesting day. 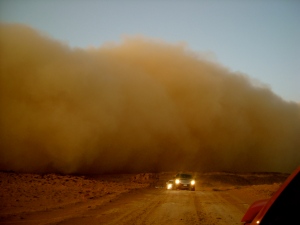 Update: So apparently the storm traveled the 100km (60ish miles) to the city..I had my apt cleaned RIGHT BEFORE I left… Spotless! And I return to a thin layer of red dust on literally everything! Grr