It’s Professional Development month. The teaching staff has survived another semester and now spends their break desk-warming and evaluating their futures. Paint by Numbers sets, knitting needles, and outdated books teaching formal Arabic have worn out their excitement. Each desk holds a pushpin board of extremely ambitious goals or countdowns to the next “break”. Hidden under her hijab, a comatose employee is stretched out on the couch, using her abaya as a makeshift blanket.

In sequence, teachers glance up at the clock wondering if the battery has died. Eight hours tick by slowly as clusters of women busy themselves with Koran study, sample potluck dishes, or share the all-too-familiar story of what has brought them to Saudi… money.  One woman, intending to be homebound when she is next inconvenienced, strikes away at job applications on her laptop. Next to her is yet another American/British debate.

“Why are they called biscuits and gravy?! Those are definitely scones and sauce!” Then comes a needed explanation of how the two ingredients go together anyway. “You Americans will eat all kinds of bits n’ bobs together. Especially when it comes to peanut bu–uh!” says the Brit, as they laugh in agreement and list off peculiar peanut butter combinations.

“I’m ready to go home”, the applicant says undirected at anyone in particular, as if thinking out loud. She has been a popular bet in private discussions of who would flee the country next. Unable to get job experience after university and having received one too many “We’re sorry to inform you” letters, it has turned a once optimistic professional into a chronic sigher.

“Should I go home to a life and family that makes me happy, but be jobless and dodge student loan collectors all month… and ruin my credit, if it isn’t already? Or be miserable and bored to tears, here, just to keep them paid and off my ass?” Her ‘pros and cons list’ has been drafted at many points throughout the year.

The questioning begins, where co-workers assess her skills, the job market, and her potential. “Well, are you, you know, like a ‘teacher-teacher’, or just teaching?” asks a real teacher who has found this her calling.

Doctors, lawyers, and hopeful retirees have found themselves teaching in Saudi after the downturn of the economy. The  moment of silence from the group says enough.

“Well, love, look at it this way. Here, you work half the time for double the money. We’ve been taking the piss this whole month! I don’t know about you lot, but we’d never find this back in the U.K.”, says the Brit with the obvious solution.

A few more opinions and trampled American Dreams and the applicant has impassively stated that she’ll finish the year. Unmindfully, she is shaking her head while voicing this decision.

“Just imagine how much you could save if you stuck it out for 5 years, got married to a teacher here, and doubled the income..” chimes one of the ‘lifers’.

With no response, the applicant’s eyes glaze over as she looks through the computer screen.

“The Constitution only guarantees the American people the right to pursue happiness. You have to catch it yourself.” ~Benjamin Franklin

After last week’s ranting, I figured that it would be appropriate to do an entry on happiness. Yesterday, my co-workers and I attended a social, where we watched an awesome, inspirational documentary, called “The Happy Movie”. It’s one of those topics that everyone searches high and low for, when it’s simply placed right under our noses. Media teaches us that happiness is something that

only certain people achieve; the beautiful, the rich, and the famous. However, people of the exact opposite have seemed to have more fulfilling lives. The start of the movie shows a man from India, who wakes early every morning to carry passengers on a rickshaw. He does this physically strenuous job in the beating sun, for hours, while wearing flip-flops .. He comes home to an open-air shack, covered by tarp, with wooden beds and dusty floors (Shadyac, 2002).. While many may not label this as the ideal life, this man was tested to be as happy as the average American. This man had a job, shelter, and a family to come home to. As long as basic needs are met, people are generally happy. 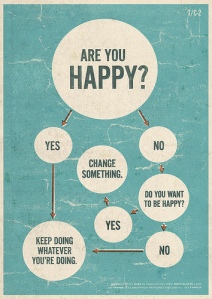 basic needs are met, the ranges of happiness between incomes of $5,000 to $50,000 are dramatic. However, happiness from $50,000 to $50 million were not as noticeable. Most of our happiness (50%) is actually genetic. While surprisingly, circumstances like income and social status, ONLY account for 10% of ones happiness. You can control the other 40%. These are done through intentional actions, such as exercise, developing close relationships, and helping others (Shadyac, 2002).  These steps can actually release just as much dopamine (or pleasure sensors) into your brain, as a cocaine high. Don’t use these neurons, and you lose them. This is possibly why you hear of happier people living longer.

In industrial Japan, people are literally working themselves to death.  As families disconnect, and priorities are geared towards money and development, this lethal exhaustion causes “Karoshi” (Shadyac, 2002). However, In Okinawa, Japan, these islanders are said to have the world’s longest living population (Shadyac, 2002). They hold on to traditions and are very connected in their social lives and between generations. This is another factor that promotes long life and happiness.

I personally believe that another intentional action is having a positive attitude, being optimistic, and associating with encouraging crowds. This seems to have a more favorable affect on your future, than money.  This is one area in my life that’s currently being tested. I once watched a movie called “The Secret”, that teaches the Law of Attraction (Byrne, 2006). Its basis was that you achieve what you believe. This movie takes a scientific approach. However, I prefer a more religious view of the theory. Have you ever driven down the rode and passed a police officer, when suddenly you start to get paranoid that you did something wrong? Next thing you know, you’re pulled over for speeding or car tags. While many may label this as a coincidence, “The Secret” would say that basically you gave off the vibe and attracted the following action.

The happiest place in the world is said to be Denmark.  Free education through college, free health care for life, and their co-housing communities allow for families to split all of the daily responsibilities (Shadyac, 2002). Sometimes we undervalue our need for other people.  Especially for the modern American women, we often are taught to be independent.  While there is nothing wrong with learning to do things on your own; none of us came into the world completely alone, as turtles, to raise ourselves. Which is why I believe that, instinctively, no one wants to die alone. Have you ever seen those random people who hold up the “FREE HUGS” signs? As silly as the idea seems, no matter the age, or the grumpiness of the receiver of the hug .. you can’t help but to pull away with a smile. We all need somebody..

In summary, happiness is not all that complicated.

“You were given life; it is your duty (and also your entitlement as a human being) to find something beautiful within life, no matter how slight” (Gilbert, 2006).